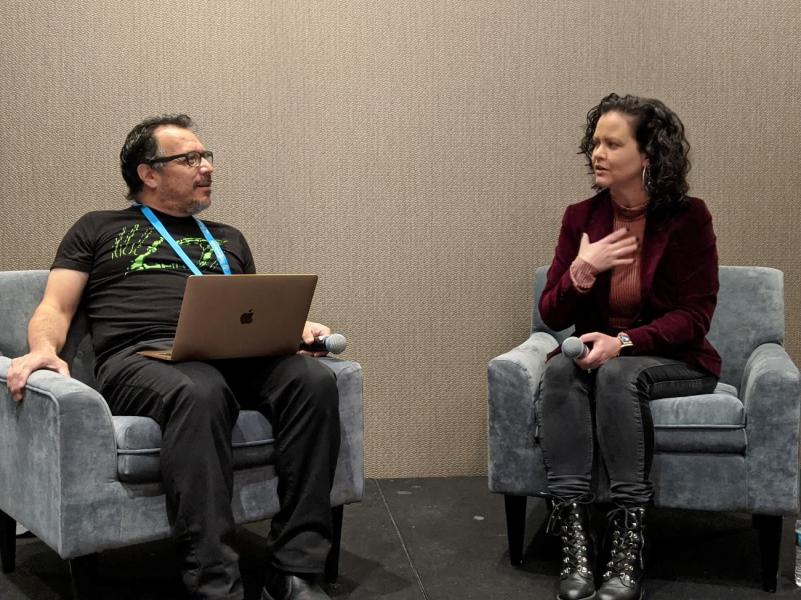 The question of who’s allowed to tell whose story is a complicated, but critical question in literature, and one that has been circulating the publishing, journalism, cinema, and other media industries for a long time. I’m glad that the publication of American Dirt has broadened the conversation about diversity in the publishing industry. I have read American Dirt, and I was also lucky enough to get a spot in the standing-room-only session with the author, Jeanine Cummins, at our industry conference last week.

American Dirt is a novel that opens with a horrific scene in Acapulco where Lydia and her family become the target of a drug cartel massacre, and she flees the city with her 8-year-old son, Luca. She quickly realizes nowhere is safe, and their story morphs into a fast-paced, harrowing journey as they migrate toward the U.S. border in an effort to escape the long reach of the cartel leader.

Leading up to and following the publication date, the book, the author, and the publisher have all come under considerable scrutiny.  Members of the Lantinx community have vehemently opposed the book for being inauthentic, inaccurate, and harmful. The author, who identifies as white, has been criticized for speaking out for people and a topic of which she is unknowledgeable, and for making harmful and untrue statements about herself and the community she wrote about. The book has been condemned as trauma porn, and the writing has been castigated as weak and inauthentic. Finally, many have berated the publishing industry for the multi-house auction, seven figure book deal, inappropriate and damaging promotional methods, and for blocking other more authentic voices from the industry.

I loved American Dirt because it is perhaps the most transporting novel I've read in many, many months. Every single day, customers come into the store and ask us for a recommendation on a book that you can't put down. This is that book. From page one, you find yourself caught up in a whirlwind story, a story so many of us identify with as parents. We've all imagined the worst scenarios, the worst possible things that could happen to our children, and agonize over how we would protect them. This book asks the question of how much a parent would sacrifice, what wouldn't you do to save your child? It is a tale of survival, a journey of the most dire circumstances, driven by one of our most primitive instincts: protecting our young.

The book is not perfect and may not be of the highest literary caliber, and it is not every migrants story. But American Dirt doesn't have to get an A+ for all the reasons we could love a book. It is unfair to not just single out, but comprehensively decimate an author for doing the same thing that so many other well-published, well-sold, and well-respected authors have done: written a compelling story reasonably well.

I cannot speak to the authors authenticity. I am not an immigrant, or Latina, or been a refugee, a resident of Mexico, or exposed to the violence the book speaks of. But I do trust that the members of the #ownvoices movement are speaking honestly and with sincerity about the shortcomings of this novel, and I think it is a good thing that the inequities in publishing have been brought to the forefront of the conversation. But the idea that one should not be allowed to write outside of their experience should be a worrisome one. So many authors, journalists, producers, and representatives have asked themselves the same thing.

“What gives me the right to tell this story?” Cummins said during her talk at Winter Institute last week. “It’s something I struggled with for five years.”

Jeanine discussed the five years she spent writing and researching the book, of how she threw out two complete drafts, and how the impact of her father's death affected her writing. She discussed how worried she was about writing the book, afraid of what people would say about her credentials for doing so.  But then she spoke of what is was like to hear the stories from migrants at the border, and the people that help them, and she was reminded how their bravery was the real example of courage, and she couldn't be afraid of publishing a book.

The allegation that Jeanine has no empathy for the people she is writing about is brash and unsupported. I heard Jeanine speak of the process, of the people she met, and watched her eyes fill with tears and her voice waver and observed her careful body language. I heard her speak of the organizations that are trying to help. I may not know much, but I do know she cares about what she has done, the people she wrote about, and the people that are upset with her.

The concern regarding authentic voice is something writers, journalists, producers, and politicians have long been struggling with. When does research and telling a story become misappropriating someone else’s hurt into your gain? Where is the line between empathy and exploitation? Jeanine spoke of her efforts to accurately represent the true danger of the migrant trail. She spoke of how very different the journey can be for men and women. The testaments of women who understood that their body was the price to be paid for passage. She reminded us that 8 out of 10 women will be raped on the journey, and the women on this trail are only undertaking the journey if there is no other alternative. In an excerpt of the interview from Shelf Awareness:

Jeanine describes her interaction with a nun who runs a shelter on the Mexico side of the border for women and children; many of the women were separated from their children, who remained on the U.S. side after the mothers were sent back. Some of the women were turned in by jealous boyfriends, or beaten and then deported. "How do you not despair?" Cummins asked the nun. "My tears will not help them," the nun responded.”

“If this book makes you go out and reach to other sources and voices," Jeanine said, "then that is everything I could have hoped for. We need every voice telling this story.”

Finally, all of these concerns culminate because of the current inequalities and lack of representation that manifest in the publishing industry. Minorities are under-represented in the publishing workforce and in the canon of published works, and there is a significant disparity between the amount of money spent obtaining and promoting titles. I am not the person to explain why, because there is just so much about history, trends, costs, and selling data that I don't know. I do know that the problem is complicated and multi-faceted.

There have been significant failures by some of the leaders of the industry to promote diversity, and the promotion for this book was insensitive. The one thing the conversation about this book has done is highlight these disparities and draw attention to changes within the industry that need to take place. 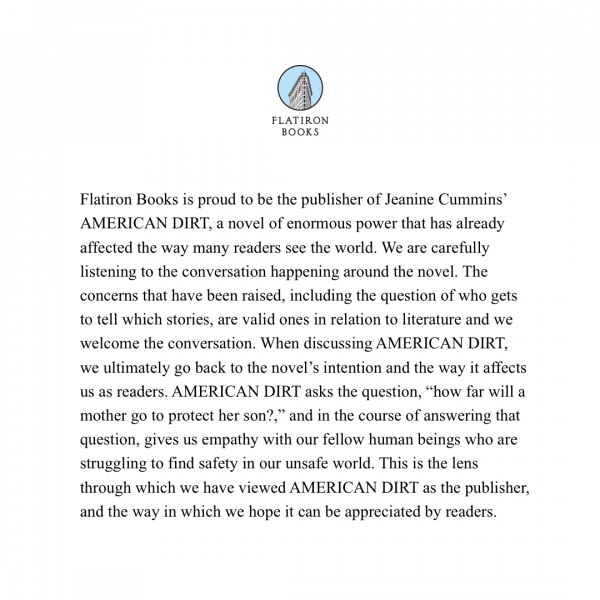 I wish I could speak on how financial decisions are made in publishing, but I can't do so knowledgeably. I do know that small and independent publishing houses struggle just as independent bookstores do with the fight against Amazon. When so much money is being funneled into one private company, when one company can dictate margins and decide who can enter the market, when one company makes or breaks the success of any book, you know an industry is at a turning point. I'm not trying to digress into a discussion on monopolies here, but when our small and independent publishers fail, and sell out to big ones, those problems transfer. If we want our publishing houses to have the bandwidth to take chances and continue to support and promote a diverse array of authors and voices and stories, we have to support the industry in a way that is sustainable. The only way forward to to break up monopolies. One in particular.

Finally, I know that the art of selling a book, is just that.. an art. I'm a pretty data-minded buyer, if it sells at my shop, I buy more. If it doesn't, I return it, and I don't have the space or cash flow to spend a long time making that decision. But the art of making that first decision, which of the million books published every year make it into my store, is entirely due to experience. Often when I'm taking a chance on a new author, it's a gut feeling that has evolved from thousands of tiny little decisions and selling experiences in my store. And I'm one person, in one small store, in one small town. Although I don't know how, I'm positive those gut instincts on which books we take a chance on and spend a lot of money on, are compounded exponentially when you are a lead editor at a big imprint, in a big publishing house, and basing your decisions on not just your decades in the industry, but the entire history of your publishing house. Maybe that's what the editors at these houses saw in this title, some indefinable reason that for whatever reason, they knew the book was going to sell. I don't shame them for that. We all need a few really profitable titles in order to support the canon of others are chosen and promoted for the love of the book, the author, the writing, or the voice.

I'm grateful this conversation has come to a head, and called out mistakes the industry is making. I hope we can forge the better path forward, but I will not shame the publisher or the author for this book. I will continue to sell American Dirt along with all the other border stories and Latinx voices that we have always carried in the store. I pulled a handful of other titles up for display next to American Dirt so you have choices in your reading. Disparaging an author is not a platform, the platform is finding ways to be more inclusive, to reach and promote diverse voices, and to support the industry outside of Amazon. As the NY Times articles says below, "American Dirt has us talking. That's a good thing."

You can join the Roundabout Books Current Fiction book club in discussion of American Dirt on May 6th at 6pm.

END_OF_DOCUMENT_TOKEN_TO_BE_REPLACED
Scroll to the top