Author Event: Beneath the Bending Skies by Jane Kirkpatrick 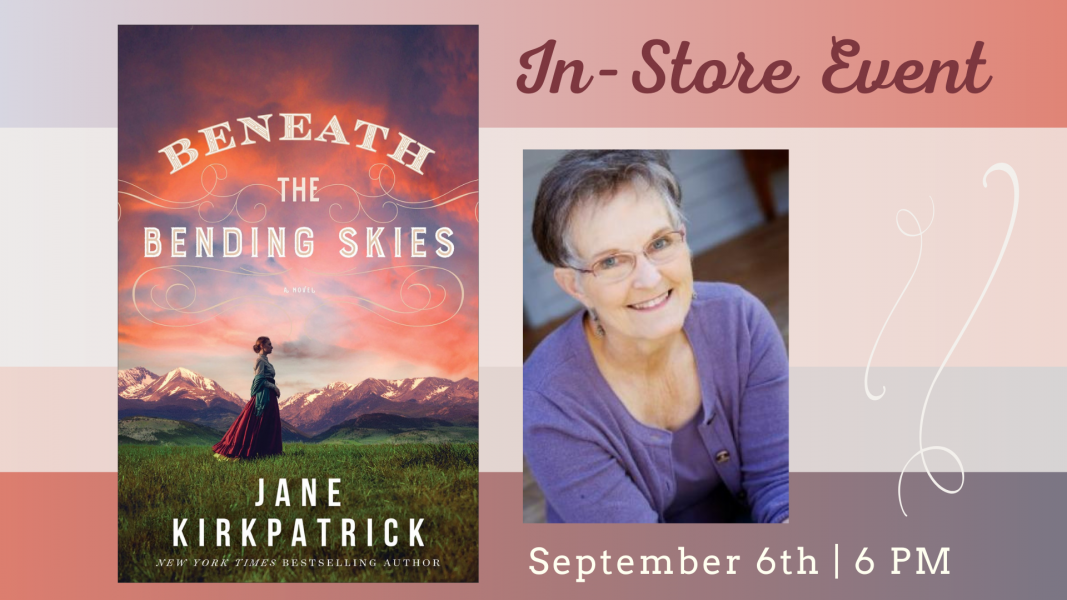 Please join us for this in-store event on the book publish date. RSVP with Eventbrite HERE.

A young woman torn between duty and her own happiness defies her father to become the wife of a man with few prospects but a firm calling as a federal agent on the Flathead Reservation in 1800s Montana. In the years that follow she will discover that even the command to"honor thy father" has its limits. Based on a true story.

Mollie Sheehan has spent much of her life striving to be a dutiful daughter and honor her father's wishes, even when doing so has led to one heartbreak after another. After all, what options does she truly have in 1860s Montana? But providing for her stepfamily during her father's long absences doesn't keep her from wishing for more.

When romance blooms between her and Peter Ronan, Mollie finally allows herself to hope for a brighter future--until her father voices his disapproval of the match and moves her to California to ensure the breakup. Still, time and providence are at work, even when circumstances are at their bleakest. Mollie may soon find that someone far greater than her father is in control of the course of her life--and that even the command to "honor thy father" has its limits.

New from New York Times bestselling author Jane Kirkpatrick, Beneath the Bending Skies is a sweeping story of hospitality, destiny, and the bonds of family.

Jane Kirkpatrick is the New York Times and CBA bestselling and award-winning author of 40 books, including The Healing of Natalie Curtis, Something Worth Doing, One More River to Cross, Everything She Didn't Say, All Together in One Place, A Light in the Wilderness, The Memory Weaver, This Road We Traveled, and A Sweetness to the Soul, which won the prestigious Wrangler Award from the Western Heritage Center. Her works have won the WILLA Literary Award, the Carol Award for Historical Fiction, and the 2016 Will Rogers Gold Medallion Award. Jane divides her time between Central Oregon and California. Learn more at www.jkbooks.com.

Beneath the Bending Skies (Paperback)