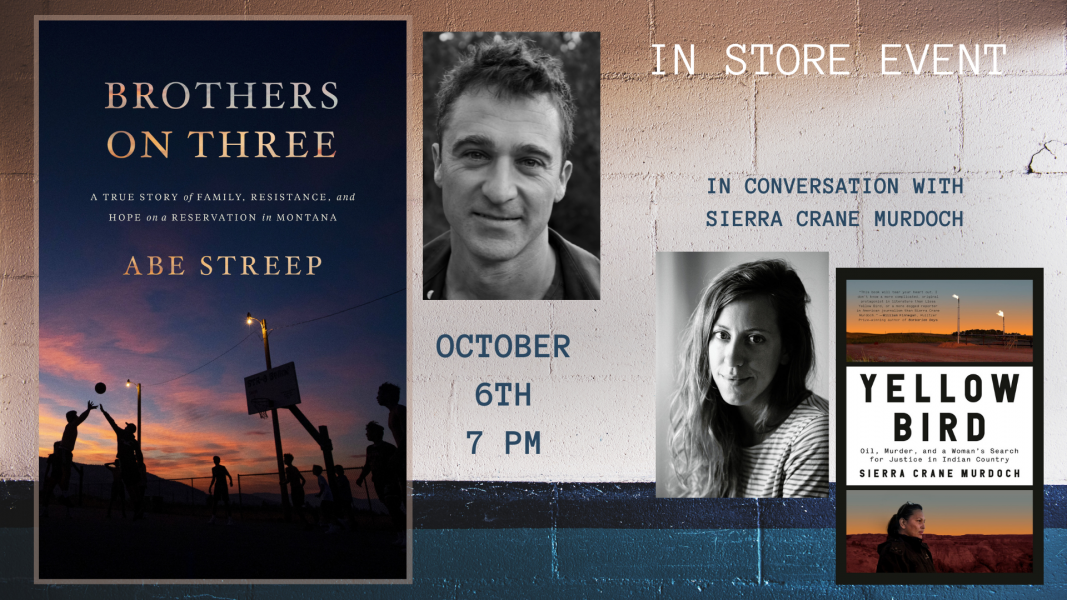 Author Abe Streep will be in conversation with Sierra Crane Murdoch, author of Yellow Bird: Oil, Murder, and a Woman's Search for Justice in Indian Country.

From journalist Abe Streep, the story of coming of age on a reservation in the American West and a team uniting a community.

March 11, 2017, was a night to remember: in front of the hopeful eyes of thousands of friends, family members, and fans, the Arlee Warriors would finally bring the high school basketball state championship title home to the Flathead Indian Reservation. The game would become the stuff of legend, with the boys revered as local heroes. The team’s place in Montana history was now cemented, but for starters Will Mesteth, Jr. and Phillip Malatare, life would keep moving on—senior year was only just beginning.

In Brothers on Three, we follow Phil and Will, along with their teammates, coaches, and families, as they balance the pressures of adolescence, shoulder the dreams of their community, and chart their own individual courses for the future.

Brothers on Three is not simply a story about high school basketball, about state championships and a winning team. It is a book about community, and it is about boys on the cusp of adulthood, finding their way through the intersecting worlds they inhabit and forging their own paths to personhood.

Abe Streep has written for The New York Times Magazine, The New Yorker, Outside, The California Sunday Magazine, WIRED, and Harper's. His writing has been anthologized in Best American Sports Writing and Noted by Best American Essays and Best American SCience and Nature Writing. He is a recipient of the 2019 American Mosaic Journalism Prize for deep reporting on underrepresented communities.

Sierra Crane Murdoch is the author of Yellow Bird: Oil, Murder, and a Woman's Search for Justice in Indian Country, which was a finalist for the Pulitzer Prize and won an Oregon Book Award. She has written for Harper's, This American Life, VQR, The New Yorker Online, The Atlantic, and High Country News. Her journalism and essays have been supported by numerous fellowships, including a Visiting Fellowship at the University of California-Berkeley Investigative Reporting Program and a MacDowell Fellowship. She lives in Hood River.

Brothers on Three: A True Story of Family, Resistance, and Hope on a Reservation in Montana (Hardcover)