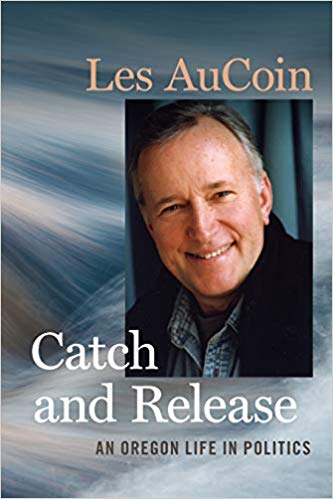 In 1974, at the age of thirty-two, Les AuCoin became the first Democrat to win a US House seat in Oregon’s First District. He was one of the post-Watergate reformers who shook up an insular, autocratic Congress and led fights for affordable housing, “trickle-up” economics, wilderness protection, abortion rights, and nuclear arms control. In the 1980s, the Oregonian called him “the most powerful congressman in Oregon.” In this compelling collection of life stories, AuCoin traces his unlikely rise from a fatherless childhood in Central Oregon to the top ranks of national power. Then came a painful defeat in one of the most controversial races in US Senate history, against incumbent Bob Packwood.

A fly fisher, AuCoin uses “catch and release” as a metaphor for succeeding and letting go of loss with dignity and equanimity. His memories are in turn funny, suspenseful, and revealing. AuCoin takes us to the Kremlin, pre-industrial China, the Arctic National Wildlife Refuge, and into the tortuous politics of the Northwest spotted owl crisis. He interacted with world figures like Mikhail Gorbachev, Ronald Reagan, House Speakers Tip O’Neill and Jim Wright, and Oregon legends Tom McCall and Mark Hatfield. Closer to home, AuCoin allied himself with activists like Sidney Lasseigne of the Newport Fishermen’s Wives. Catch and Release offers readers a revealing glimpse behind the scenes of congressional life, as lived by the 535 souls who inhabit the US House and Senate—including the author, who assesses his own strengths and foibles with humility and candor.

Catch and Release: An Oregon Life in Politics (Paperback)

END_OF_DOCUMENT_TOKEN_TO_BE_REPLACED
Scroll to the top