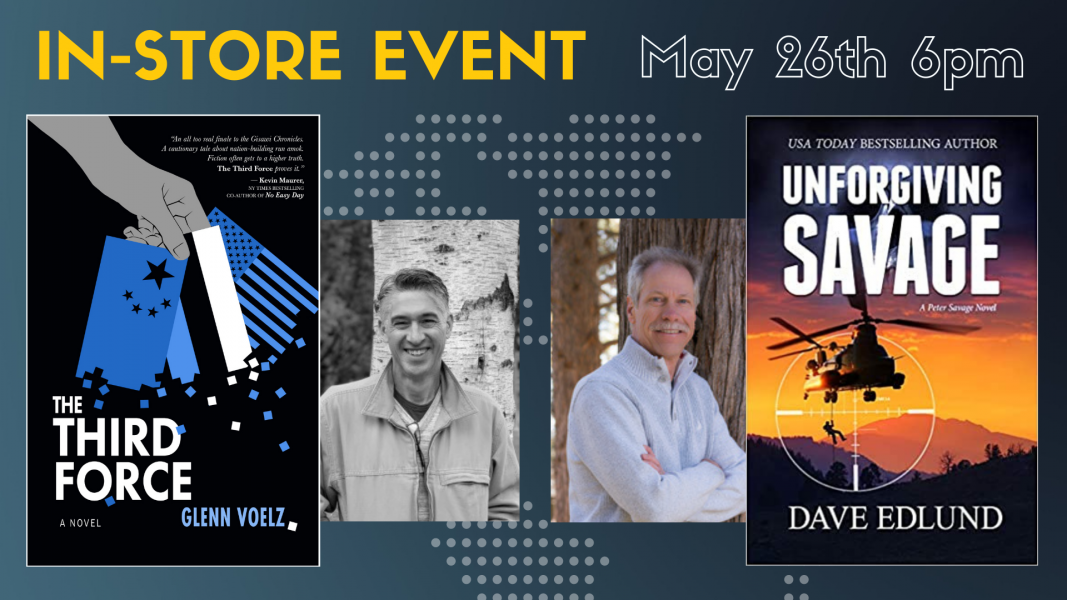 Missed the event? Watch it HERE.
Join Bend authors Glenn Voelz and Dave Edlund for a conversation on the challenges of writing serial novels, breaking into the publishing industry, and their latest works.

The Third Force is the dramatic conclusion of The Gisawi Chronicles. The Democratic Republic of Gisawi is on the verge of historic elections after the ousting of the county’s longtime dictator. The fragile democracy is imperiled when an infamous warlord and his rebel army threaten to send the country into chaos. Meanwhile, superpower rivals are scheming for advantage, manipulating the presidential election, and claiming their share of the prize. When Colonel Louie Bigombe emerges as a surprise candidate, it’s unclear who’s supporting him and why. He must discover the truth as the campaign turns deadly for those he most wants to protect.

Glenn Voelz served for twenty-five years in the Army as an intelligence officer and spent over a decade living and working in Asia, Europe, the Middle East, and Africa. He held leadership positions at the Pentagon on the Joint Chiefs of Staff, in the White House Situation Room, and at NATO headquarters. Glenn now lives in Oregon with his family.

He has published over a dozen books and journal articles on various topics, including diplomatic history, government contracting, military innovation, and emergency management. His most recent novel, The Third Force, will be released in Spring 2022.

When not writing, Glenn works as a professional ski patroller at the Mt. Bachelor Nordic Center. He is a Wilderness Emergency Medical Technician and volunteer member of the Deschutes County Sheriff’s Office Search and Rescue Team. He also serves as a board member on the Summit West Neighborhood Association in Bend, Oregon.

Peter wants nothing more than to settle into a normal life with his fiancée, Kate Simpson. But the Fates seems to have other plans as he finds himself in a deadly confrontation with North Korean agents intent on stealing his latest invention; a pulsed energy weapon that promises to revolutionize small arms technology and upend the international balance of power. After suffering a heartbreaking loss at the hands of the North Koreans, Peter is devastated. Vowing retribution, he has only one option. With his faithful companion Diesel by his side, Peter must retreat to a remote section of Idaho wilderness known as the Zone of Death—a large, uninhabited tract of Federal land where one can literally get away with murder. Somehow, he must entice the North Korean assassins to follow him. There, Peter will need all his skills as a hunter to kill… or be killed.

USA Today bestseller Dave Edlund is the award-winning author of the high- octane Peter Savage Novel. A member of the International Thriller Writers, Dave’s action-political thrillers are often compared to the Dirk Pitt novels by Clive Cussler, the Sigma Series novels by James Rollins, the Jack Ryan novels by Tom Clancy, and the historical international thrillers of Steve Berry.

In Spring 2021, Dave will debut Judgement at Alcatraz, the first full length novel based on the female Mossad assassin Danya Biton (a popular character who was introduced in Hunting Savage, and also appeared in Lethal Savage).

When Dave isn’t cooking up the latest adventure for Peter Savage, readers can find him working as a leading expert in hydrogen energy. He is an inventor on 114 US Patents and more than 300 foreign patents. He has published in excess of 100 technical articles and presentations and has been an invited author of several technical books on alternative energy. Dave is a graduate of the University of Oregon with a doctoral degree in chemistry. An avid outdoorsman and shooter, he’s hunted throughout North America for big game ranging from wild boar to moose to bear. Dave is a long-time resident of Bend, Oregon, where he lives with his wife and three dogs (The Dude, Lucy Liu, and Tenshi).