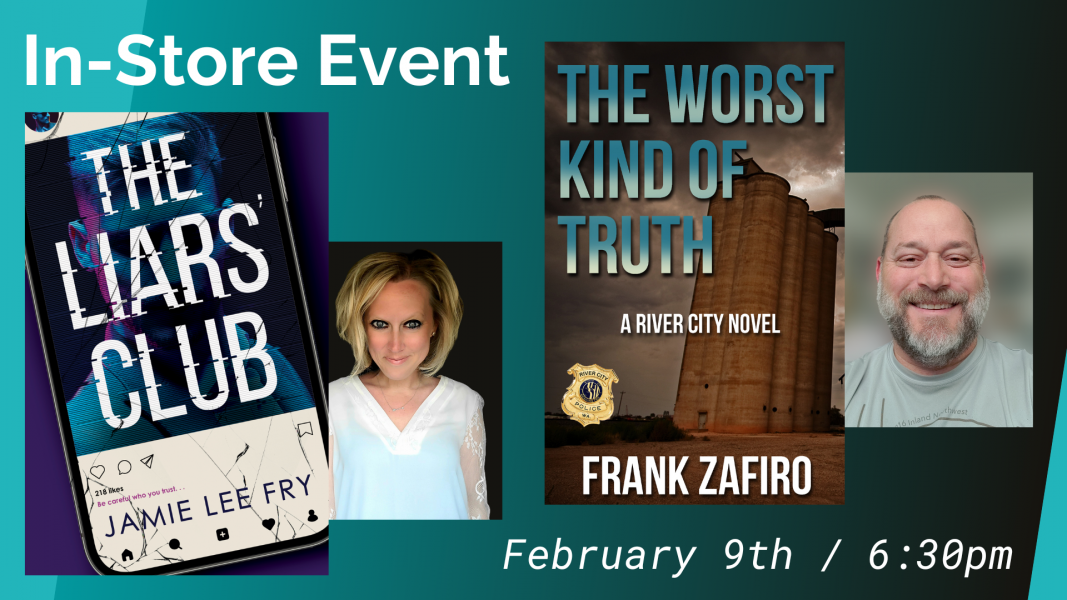 This is a ticketed event requiring a $5 fee or purchase of the book. Fees and books can be purchased through Eventbrite here.

The Worst Kind of Truth - Detective Katie MacLeod has her hands full. It has been four years since her promotion to detective, and after paying her dues in property crimes investigations, she has made it to the Major Crimes unit. This is where the highest profile cases land—homicides, robberies, serious assaults, and sexual assaults. Katie catches two rape cases almost back-to-back. One victim is a prostitute with an unknown suspect… who Katie fears may be gearing up for more assaults. The other victim is a college student who has accused her boyfriend, a popular baseball player, of raping her at a party. Both cases have their own set of perils. Katie juggles her time investigating each one, encountering many obstacles—a lack of evidence in one, and wondering how to parse conflicting statements in the other. As she battles past these difficulties, Katie faces another fact… that both cases hit home with her in very different ways. Solving them becomes more than just a job for her, but something deep-seated and personal… something that may exorcise some of her own demons from the past. Or will they consume her?

Frank Zafiro writes gritty crime fiction from both sides of the badge. He was a police officer from 1993 to 2013, holding many different positions and ranks. He retired as a captain. Frank is the author of over forty novels, most of them crime fiction. These include his River City series (procedurals), SpoCompton series (hardboiled), and Stefan Kopriva mysteries (private investigator), along with several other series. In addition to writing, Frank hosted the crime fiction podcast Wrong Place, Write Crime. He is an avid hockey fan and a tortured guitarist. He currently lives in Redmond, Oregon.

The Liars’ Club - HOW FAR WOULD YOU GO TO KEEP YOUR SECRETS HIDDEN? Max Jennings is broken and damaged. He’s built a new life to protect himself. Then Max meets the charismatic and handsome Ben Matthews, who offers him a life-changing experience; a club that will fix him. And Max can’t help but be intrigued. But soon, Max realizes this club comes at a high price. And the premiums are murder.

Jamie Lee Fry is an adventure blogger turned psychological-thriller writer. She released her debut novel, The Pretty Ones, in 2021. When she’s not hunched over her desk creating thrilling stories, she’s exploring the forests of Oregon with her husband, Jeremy. She has two Papillons, Daphne and Dexter, that go everywhere with her, including stand-up paddleboarding and kayaking. Jamie never says no to a good adventure, as long as mountains and waterfalls are involved. Jamie also enjoys a strong cup of coffee, baking, and documenting life with her camera.

The Worst Kind of Truth (Paperback)