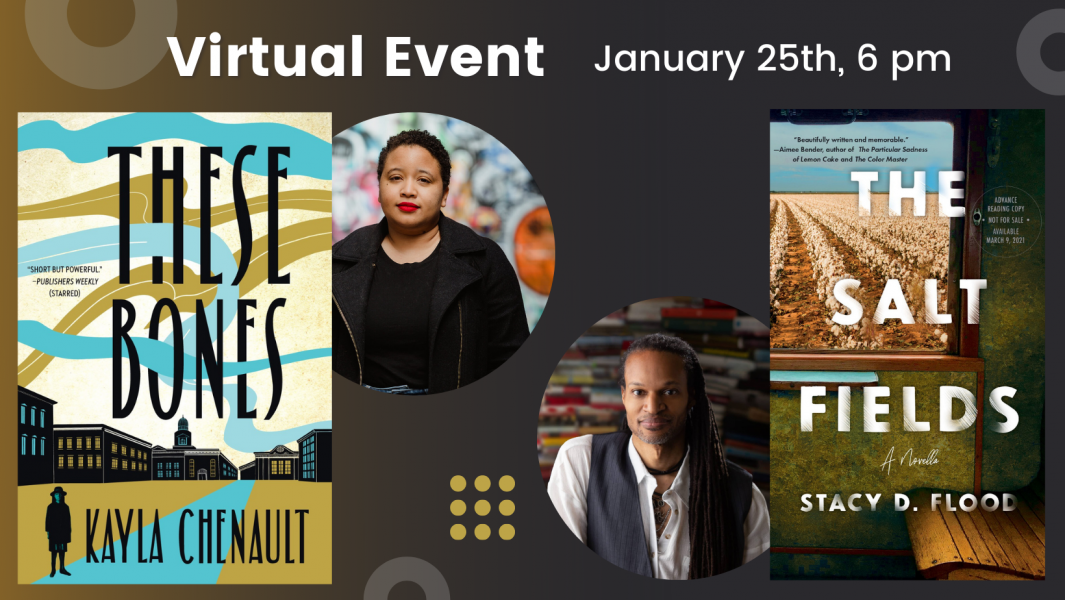 Missed the event? Please view on our YouTube channel here.

These Bones by Kayla Chenault

Chenault's mesmerizing debut follows the Lyons family starting in 1909 through a series of vignettes that create a mosaic portrait of the Bramble Patch, the Black section of fictional Midwestern city Napoleonville, which was "built on the bones of its dead." The tale is framed by a request for information from the Napoleonville Historical society to Wanhope Lyons, who remembers the city's racist, segregated history all too well and knows that even though his home has crumbled and his people have dispersed, no one who lived there will ever truly leave the Bramble Patch. The ensuing story is constructed of first-person accounts, news clippings, academic writing, and interviews, building a polyphonic narrative of a deteriorating community-and the demonic entity called the Barghest who feeds off them. Chenault's short but powerful gothic work blends the best elements of folklore, horror, the blues, and archival history in resonant and lyrical prose. Fans of alternate histories, suspenseful literary fiction, and Black speculative fiction will be hooked on piecing together this intricate, entrancing tale.

Kayla Chenault is a practitioner of Black Girl Magic and holds a Master's in Creative Writing from Eastern Michigan University. When she is not writing, Kayla is found at the museums where she works or telling everybody about the history of popular music and social dance. She is a former line editor and contributing writer for Cecile's Writers. Her previous work can be found in The Blue Pages Journal and Honey and Lime literary magazine.

The Salt Fields chronicles this day's journey of four African-American passengers - Minister, a soldier named Carvall, and the young couple Lanah and Divinion, each searching for a new life, but none sure of what that means - as they travel through a myriad of locations, histories, and events that shape who they are, what they dream, what they are escaping, who they will eventually become, and what experiences they will have to endure in order to do so.

"There's a beautiful formality to this writing that beckons a reader in, and then the vibrancy of the dialogue and the surreal allure of the scenes surprise and open up the story. A novella both stamped in time, and timeless. Flood has made something memorable here."-Aimee Bender, author of The Particular Sadness of Lemon Cake and The Color Master

Stacy D. Flood is originally from Buffalo, and currently living in Seattle, Flood's work has been published and performed nationally as well as in the Puget Sound Area. Having received his MFA in Creative Writing from San Francisco State University, he has also been an artist-in-residence at DISQUIET in Lisbon, as well as The Millay Colony of the Arts. In addition, he is the recipient of the Gregory Capasso Award in Fiction from the University at Buffalo, along with a Getty Fellowship to the Squaw Valley Community of Writers.