Fall into OBOB series: The Barren Grounds by David A. Robertson 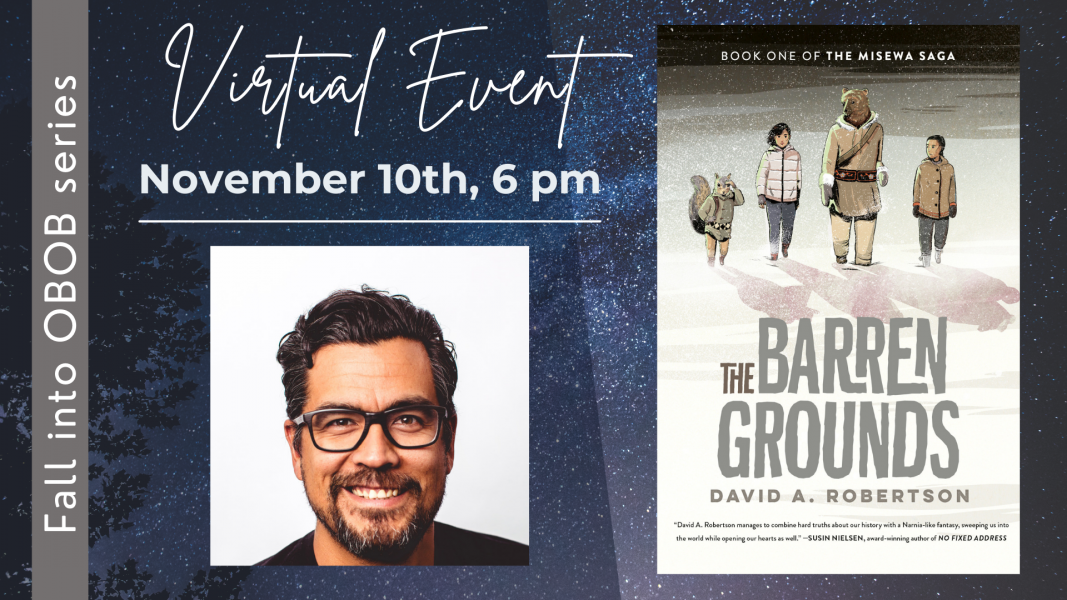 Missed the event? Watch it here.

David A Robertson, author of Oregon Battle of the Books title The Barron Grounds, will join us via Zoom for a Q&A from readers, parents, and teachers. Submit your questions to events@roundaboutbookshop.com.

Morgan and Eli, two Indigenous children forced away from their families and communities, are brought together in a foster home in Winnipeg, Manitoba. They each feel disconnected, from their culture and each other, and struggle to fit in at school and at their new home -- until they find a secret place, walled off in an unfinished attic bedroom. A portal opens to another reality, Askí, bringing them onto frozen, barren grounds, where they meet Ochek (Fisher). The only hunter supporting his starving community, Misewa, Ochek welcomes the human children, teaching them traditional ways to survive. But as the need for food becomes desperate, they embark on a dangerous mission. Accompanied by Arik, a sassy Squirrel they catch stealing from the trapline, they try to save Misewa before the icy grip of winter freezes everything -- including them.

Series Overview: This series reflects stories of the sky and the constellations held within its great canvas. The word "misewa" is Cree for "all that is" -- elders say that what is above is mirrored below, and this is the connection we have with misewa.

"David A. Robertson has written such a fine, beautiful novel. He manages to combine hard truths about our history with a Narnia-like fantasy, sweeping us into the world of the story while opening our hearts as well." —Susin Nielsen, author of We Are All Made of Molecules and No Fixed Address

DAVID A. ROBERTSON (he, him, his) was the 2021 recipient of the Writers’ Union of Canada Freedom to Read Award. He is the author of numerous books for young readers including When We Were Alone, which won the 2017 Governor General's Literary Award and the McNally Robinson Best Book for Young People Award. The Barren Grounds, the first book in the middle-grade The Misewa Saga series, received a starred review from Kirkus, was a Kirkus and Quill & Quire best middle-grade book of 2020, was a USBBY and Texas Lone Star selection, was shortlisted for the Ontario Library Association’s Silver Birch Award, and was a finalist for the 2020 Governor General’s Literary Award. His memoir, Black Water: Family, Legacy, and Blood Memory, was a Globe and Mail and Quill & Quire book of the year in 2020, and won the Alexander Kennedy Isbister Award for Non-Fiction as well as the Carol Shields Winnipeg Book Award at the 2020 Manitoba Book Awards. On The Trapline, illustrated by Julie Flett, won David's second Governor General's Literary Award and was named one of the best picture books of 2021 by the CCBC, The Horn Book, New York Public Library, Quill & Quire, and American Indians in Children's Literature. Dave is the writer and host of the podcast Kíwew, winner of the 2021 RTDNA Praire Region Award for Best Podcast. He is a member of Norway House Cree Nation and currently lives in Winnipeg.

The Barren Grounds: The Misewa Saga, Book One (Paperback)