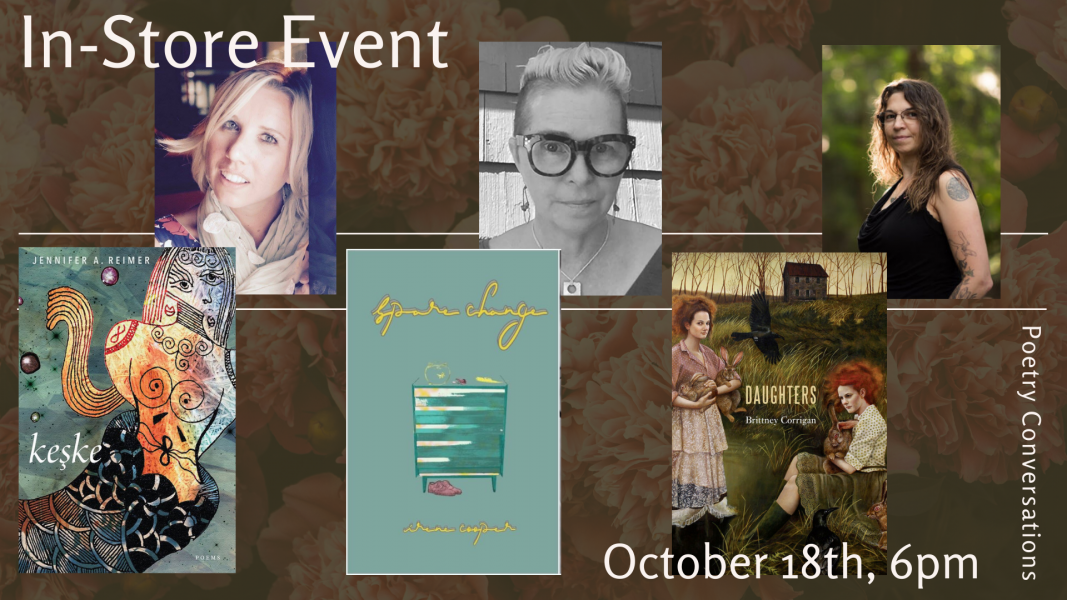 Please RSPV for this free event with Eventbrite here.

Wistful memory, future longing, nostalgia for unrealized possibilities, Keşke joins the ancient and the modern to the intense lyric experience of self-discovery. Watery scenes rewrite Homeric myth with a feminist eye while verses unfold inner worlds with tangible sensuality. Experimental yet measured, Keşke is shaped by forgotten caves, ancient ruins, wave-battered ships, and the ragged angularity of the Mediterranean coast. Evoking desire for what is absent, Keşke traverses the slipping movement of time and attachment, hope and impossibility, with a clear eye and a passionate hunger for where and what we might have been.

Jennifer A. Reimer Recio is Assistant Professor of American Studies and MFA Program Coordinator at Oregon State University—Cascades. She has lived in Cyprus, Turkey, Denmark, Austria, and the Basque coast. A proud native Californian, she currently lives in Bend, Oregon with her husband and The Cat Belmonte. Follow her on Instagram @jenniferareimer.

spare change is anything but spare. Let me explain. as a collection of visual pillars—half-submerged doric columns whose slippery texture speaks to both past and present as one—spare change offers up towers of the kind of language you can chew on. taste. But the thing about pillars, about towers? While built with longevity in mind, they are subject to disintegration. and so the poems of this text morph and break down, bloom and unmoor you. then re-form in their midsection—in the shape of a heroic crown of sonnets— before shapeshifting again, into fish, the life phases of a tooth, medicinal rain. and through it all: an animal use of animal language, the kind that leans into the hard heart of things: dead brother to daughter to mother to dead brother, and back again.
–Laura Winberry, bell lap

The fierce utterances of spare change are anything but. In poems that dart and turn, on matters as elemental as loss and desire, surfaces are unstable, ironies often lurking at line breaks. In one of the loveliest poems I’ve ever read from mother to daughter, the poet, speaking of her infant, writes

i pared each fingernail as she slept

her rage a thrill

Fearless in their desire to arrive at difficult truths, these poems are bracing, generous—and beautiful. You will not forget them.
–Boyer Rickel

Irene Cooper’s debut poetry collection, spare change, is a book that holds at its center the multiplicities of grief (“permission to speak/to the open wound” of a dead brother, a family fractured by alcoholism, abuses of power, even the routine wonder of raising children) inside language that refuses sentimentality and is, instead, experiential. In a world where honesty is surprising (and figuratively, and sometimes literally, death-defying), here is a writer who insists on the truth, demanding that we attend to the turns, the edges, the possible slippages of individual words. It is work and it is worth it. Take heart in this daring. When I read these poems I feel I am in the presence of presence (“to believe/to loiter”) – which is to say the muck of it: love.
–TC Tolbert

This collection reimagines characters from mythology, folklore, fairy tales, and pop culture from the perspective of their daughters—daughters we don’t expect such individuals to have, as we don’t usually think of Bigfoot, the Mad Hatter, or Medusa as parents.

The persona poems in Daughters give voice to the guilt, resentment, and anger that may come with raising a child as well as explore the intertwining of these shameful feelings with pride and love. These figures are a new visioning, from the daughters’ perspective, of what it means to shape another human being.

Taking on such topics as aging, rebellion, loss, domestic violence, homelessness, and gender identity, the voices of Daughters aim to upend the reader’s conceptions of the characters and throw light upon what it means for a girl to come out from under her parents as a woman of her own making.

Brittney Corrigan is the author of three previous books of poetry: Breaking (WordTech Editions), Navigation (The Habit of Rainy Nights Press), and 40 Weeks (Finishing Line Press). Corrigan was raised in Colorado and has lived in Portland, Oregon for the past three decades, where she is an alumna and employee of Reed College. She is currently at work on her first short story collection.