Zoom Author Event: Girls at the Edge of the World by Laura Brooke Robson 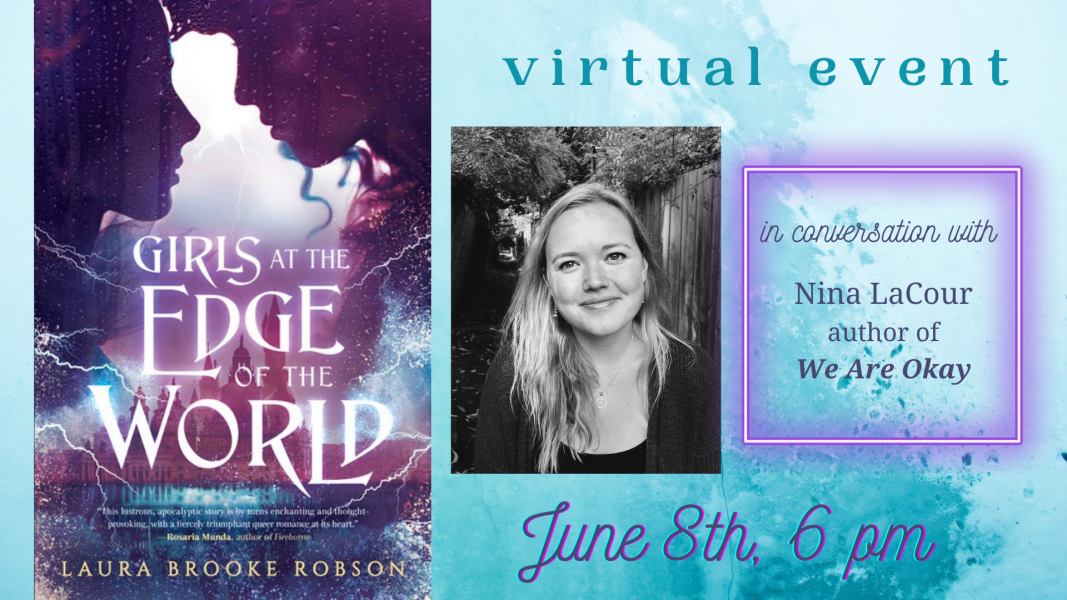 This event will be in-conversation with Nina LaCour, author of We Are Okay.

Set in a world on the edge of an apocalyptic flood, this heart-stoppingly romantic fantasy debut is perfect for fans of Rachel Hartman and Rae Carson.

In a world bound for an epic flood, only a chosen few are guaranteed safe passage into the new world once the waters recede. The Kostrovian royal court will be saved, of course, along with their guards. But the fate of the court’s Royal Flyers, a lauded fleet of aerial silk performers, is less certain. Hell-bent on survival, Principal Flyer, Natasha Koskinen, will do anything to save the flyers, who are the only family she’s ever known. Even if “anything” means molding herself into the type of girl who could be courted by Prince Nikolai. But unbeknownst to Natasha, her newest recruit, Ella Neves, is driven less by her desire to survive the floods than her thirst for revenge. And Ella’s mission could put everything Natasha has worked for in peril.

As the oceans rise, so too does an undeniable spark between the two flyers. With the end of the world looming, and dark secrets about the Kostrovian court coming to light, Ella and Natasha can either give in to despair…or find a new reason to live.

Laura Brooke Robson grew up in Bend, Oregon and moved to California to study English at Stanford University. She currently lives in Melbourne, Australia, where she enjoys drinking too much coffee and swimming in places she's probably not supposed to swim. Girls at the Edge of the World is her debut novel.

Nina Lacour is the bestselling and Michael L. Printz Award-winning author of four critically acclaimed young adult novels published by Dutton Books: We Are Okay, Hold Still, The Disenchantments, and Everything Leads to You. She is also the co-author of You Know Me Well, a novel written in collaboration with David Levithan and published by St. Martin's Griffin, and a contributor to numerous anthologies, including Summer Days and Summer Nights, edited by Stephanie Perkins.

Girls at the Edge of the World (Hardcover)