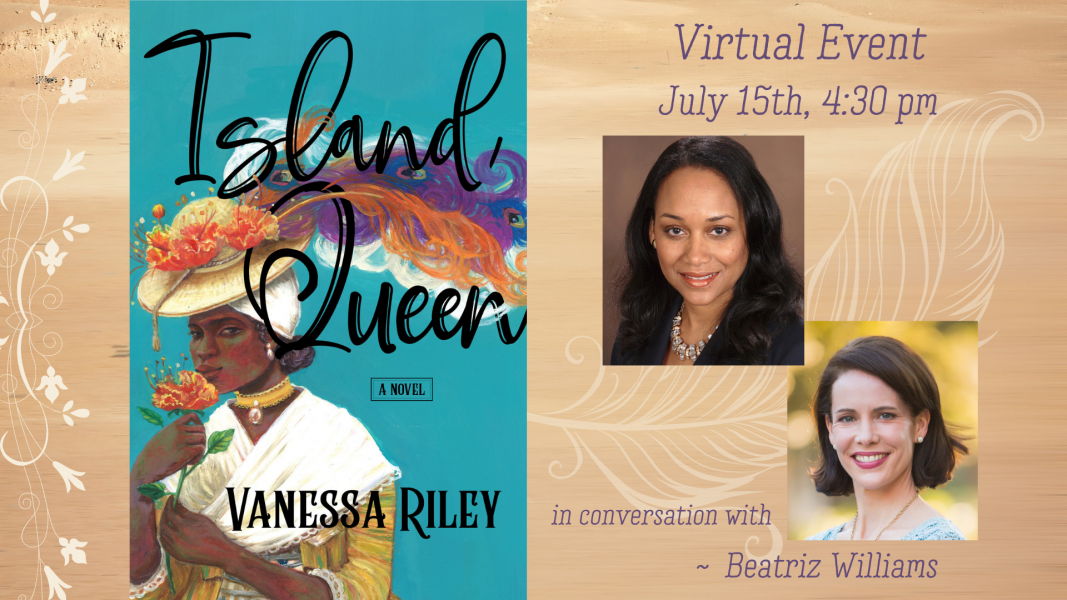 This is a FREE VIRTUAL event! To attend, follow this LINK.

This will be a panel of authors including Vanessa Riley and Beatriz Williams. The discussion will be moderated by Maureen Lenker from Entertainment Weekly Magazine.

The mainstream breakout book for acclaimed African-American romance novelist Vanessa Riley: A remarkable, sweeping historical novel based on the incredible true life story of Dorothy Kirwan Thomas, a free woman of color who rose from slavery to become one of the wealthiest and most powerful landowners in the colonial West Indies.

Born into slavery on the tiny Caribbean island of Montserrat, Doll bought her freedom—and that of her sister and her mother—from her Irish planter father and built a legacy of wealth and power as an entrepreneur, merchant, hotelier, and planter that extended from the marketplaces and sugar plantations of Dominica and Barbados to a glittering luxury hotel in Demerara on the South American continent. Vanessa Riley’s novel brings Doll to vivid life as she rises above the harsh realities of slavery and colonialism by working the system and leveraging the competing attentions of the men in her life: a restless shipping merchant, Joseph Thomas; a wealthy planter hiding a secret, John Coseveldt Cells; and a roguish naval captain who will later become King William IV of England. From the bustling port cities of the West Indies to the forbidding drawing rooms of London’s elite, Island Queen is a sweeping epic of an adventurer and a survivor who answered to no one but herself as she rose to power and autonomy against all odds, defying rigid eighteenth-century morality and the oppression of women as well as people of color. It is an unforgettable portrait of a true larger-than-life woman who made her mark on history.

In addition to being a novelist, Vanessa Riley holds a doctorate in mechanical engineering and a master’s in industrial engineering and engineering management from Stanford University. She also earned BS and MS in mechanical engineering from Penn State University. She currently juggles mothering a teen, cooking for her military-man husband, and speaking at women’s and STEM events. She loves baking her Trinidadian grandma’s cake recipes and collecting Irish crochet lace. You can catch her writing from the comfort of her porch in Atlanta, Georgia, with a cup of Earl Grey tea.