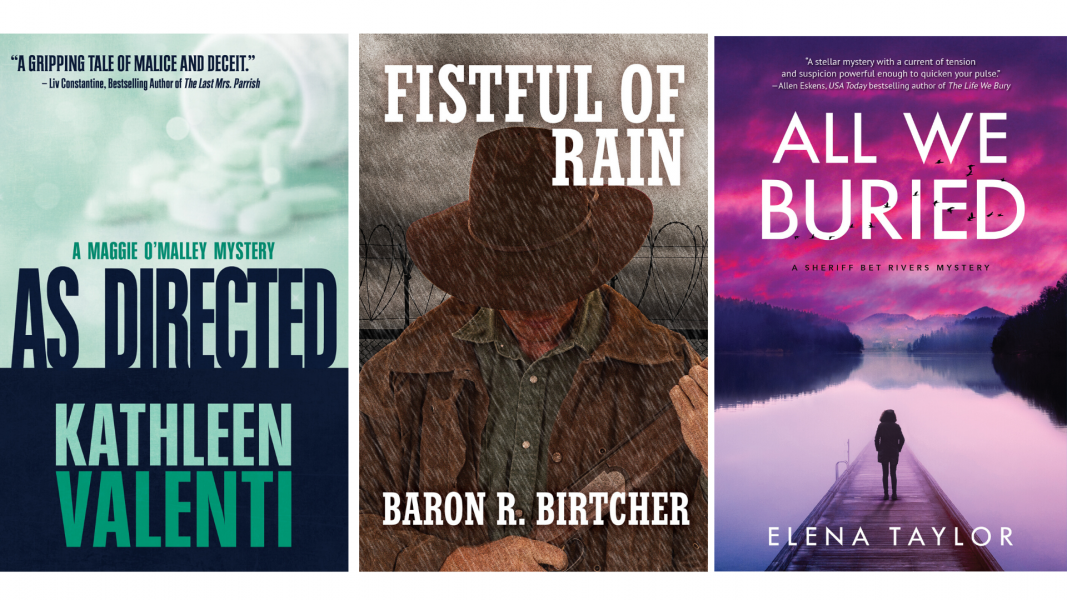 Each author will discuss their new book and writing in the mystery genre. Attendees are encouraged to ask questions as this is an interactive event, and there will be a fun bonus from the authors! Books are available for purchase at the store or online at www.roundaboutbookshop.com. We look forward to this panel presentation with three talented Pacific Northwest authors!

As Directed by Kathleen Valenti
In the shadow of a past fraught with danger and tainted by loss, former pharmaceutical researcher Maggie O’Malley is rebuilding her life, trading test tubes for pill bottles as she embarks on a new career at the corner drugstore. But as she spreads her wings, things begin to go terribly wrong. A customer falls ill in the store. Followed by another. And then more. The specter of poisoning arises, conjuring old grudges, past sins, buried secrets and new suspicions from which no one is immune. As Maggie and her best friend Constantine begin to investigate, they discover that some of the deadliest doses come from the most unexpected places.

Kathleen Valenti has been writing for more than 20 years, first as a nationally award-winning copywriter and now as the author of the Maggie O'Malley Mystery Series. A firm believer that deadpan can be dead-on, I combine funny with frightening to craft page-turners of mystery and suspense. When I'm not making nouns and verbs play nice, I hang out with my family, drink far too much coffee, and pretend to enjoy running.

is the sequel to 2017's South California Purples. Set in 1975, it is the story of a nation, a rural county, and a small town coming to terms with turbulent change. The theft of a rancher's livestock ends in an assault that escalates into arson, and the murders of nearly a dozen people. Residents of a "hippie" commune are accused of having committed the acts that have led the small county to the brink of a range war, and of feeding the tensions between generations. Sheriff Ty Dawson, a cattle rancher himself, finds himself at the center of a battle between town residents and the "hippies" who appear to be threatening their way of life, a struggle that leads both sides to violence. Written with equal parts elegance and grit, FISTFUL OF RAIN is a fast-paced literary thriller populated by unforgettable characters, outstanding dialogue, and a setting that will have you wishing you could live in it long after the last page has been turned.

Baron R. Birtcher spent a number of years as a professional musician and founded an independent record label and management company. Critics have hailed Baron's writing as "the real deal" (Publishers Weekly), and his plots as "taut, gritty, and powerfully con-trolled" (Kirkus Reviews). His first two novels (Roadhouse Blues and Ruby Tuesday) are Los Angeles Times and Independent Mystery Booksellers Association best sellers, and he has been nominated for a number of literary awards, including the Nero Award (Hard Latitudes), the Claymore Award (Rain Dogs), the Left Coast Crime Lefty Award (Angels Fall), and won the Silver Falchion Award in 2016 (Hard Latitudes). He is the 2018 WINNER of the Killer Nashville READER'S CHOICE AWARD (South California Purples) and 2019 WINNER for BEST BOOK OF THE YEAR (Fistful Of Rain). Baron divides his time between Portland, Oregon and Kona, Hawaii.

All We Buried by Elena Taylor

Deep in the woods surrounding the Cascade Range, a canvas-wrapped body floats in a lake, right in Elizabeth “Bet” Rivers’ jurisdiction. Bet has been sitting as interim sheriff of Collier after her father’s–the previous sheriff’s–death four months ago. Everyone knows everyone in a town like Collier. She has made it her duty to protect the people she’s come to see as family. And she intends to hold her title in the upcoming election, but she’s never worked a murder investigation on her own before and her opponent and deputy, Dale Kovac, isn’t going down without a fight.

Upon unwrapping the corpse, Bet discovers the woman is from out of town. Without an identification, the case grows that much more puzzling. Determined to prove herself worthy, however, Bet must confront the warped history of Collier. The more she learns, the more she realizes she doesn’t know the townspeople of Collier as well as she thought, and nothing can prepare her for what she is about to discover.

Elena Taylor spent several years working in theater as a playwright, director, designer, and educator before turning her storytelling skills to fiction. Her first series, the Eddie Shoes Mysteries, written under the name Elena Hartwell, introduced a quirky mother/daughter crime fighting duo. With All We Buried, Elena returns to her dramatic roots and brings readers a much more serious and atmospheric novel. Located in her beloved Washington State, Elena uses her connection to the environment to produce a forbidding story of small-town secrets and things that won’t stay buried. When she’s not writing or coaching writing, her favorite place to be is at the farm with her horses, Jasper and Radar, or at her home, on the middle fork of the Snoqualmie River in North Bend, Washington, with her husband, their dog, Polar, and their cats, Coal Train and Cocoa. Elena holds a B.A. from the University of San Diego, a M.Ed. from the University of Washington, Tacoma, and a Ph.D. from the University of Georgia.

All We Buried: A Sheriff Bet Rivers Mystery (Hardcover)

END_OF_DOCUMENT_TOKEN_TO_BE_REPLACED
Scroll to the top